Rykard's 2nd album Luminosity is coming out on Sept 17th, 2016 on digital worldwide! Limited CD's will be available October 17th through Amazon and Big Cartel, and super limited 12" vinyl with some unreleased material on B side will be available at the beginning of 2017.

So excited and proud of Rick, the guy is an absolute genius when it comes to atmospheric electronica. I think my favorite track on Luminosity so far is Artificial Sunshine which I'm pretty sure he wrote for the wonderful Anne Litt, but I could be wrong. :)

I'm throwing Rick's bio and some links below for anyone interested...

RYKARD is a producer of ambient electronica from the gloomy countryside of Lancashire, England. His first debut album “Arrive the Radio Beacon” in 2010 made waves across the globe with his unique blend of atmospheric bliss that wowed radio DJ’s on the BBC, KCRW Los Angeles and more.

RYKARD’s second album Luminosity maintains a similar philosophy but takes things to another level, a stunning arrangement of atmospheric electronica from another dimension. Luminosity is set for a Sept 17th, 2016 release with limited CD’s coming October and also exclusive limited Vinyl coming soon after.

"Comparisons with Boards of Canada are inevitable. However, he has forged his own sound. Ictis, the first teaser for his new album, Luminosity, is as wide and expansive as the County he hails from. Opening with a hint of 808 State’s Pacific State, Ictis emerges into slow-chilled trip-hop beats, dub bass and shimmering synths that mingle to produce trance-like melodies. This dark-edged, introspective and contemplative mood allows the listener to create their own journey. Ictis is a stunning arrangement of atmospheric electronica dabbling in delicate melodies and dimensional flurries." - Unknown Pleasures
Posted by Evan Marcus at 9:44 AM No comments: 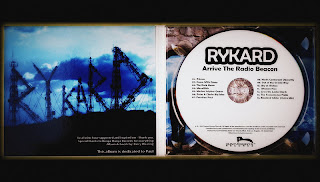 The final processing will take 1-2 months before the album gets in rotation. So proud of him, and so well deserved.

Posted by Evan Marcus at 9:44 AM No comments:

Enough said, thanks for the support!

Posted by Evan Marcus at 4:56 AM No comments:

Just finished up a great interview with Adrian from Mixdown Magazine in Romania. You can read the full interview here:
http://news.itraining.ro/afiseaza_topic.php?topic_id=12
Posted by Evan Marcus at 4:02 PM No comments:

Rykard in Rotation again on KCRW!

The wonderful folks at KCRW, Anne Litt and others have been playing Rykard's album Arrive the Radio Beacon on rotation recently. I can't thank them enough for the support, the one station that has influenced so many filmmakers, artists bands and DJ's, myself included, thank you guys, so much for the support.

If you haven't already, check out Rykard's latest album on Amazon, or iTunes. The CD release will be this winter.

Posted by Evan Marcus at 3:12 PM No comments:

KCRW's Anne Litt plays RYKARD - Down with Ginny (ON AIR!)

Anne Litt @ KCRW has just hammered Rykard's track "Down with Ginny"! Anne Litt is the acclaimed hostess of KCRW’s popular weekend afternoon music program and has served as music supervisor for such beloved and influential films as Little Miss Sunshine. Thanks for the support Anne!

For those of you who don't know, KCRW is one of the most famous radio stations for music supervisors and filmmakers to find and hear new music. Countless artists and bands have gotten recognized from air-play on KCRW. The theme song for "The Sopranos" was picked up because of KCRW. KCRW is broadcast in Santa Monica but has live streaming radio on their website and also if you have an iPhone you can download KCRW's super awesome app, basically taking KCRW anywhere and everywhere around the globe.

From the BBC Radio to L.A.'s biggest and most influential station KCRW, we are humbled and so thankful for the international support Rykard has received so far.